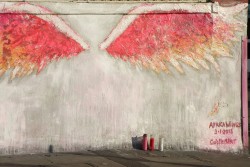 Brother Africa’s death brings into focus the convergence of state violence in the lives of Black people, and particularly the implications for Black immigrants. Ota Omoruyi, a Nigerian immigrant and friend of Keunang told Complex: “Why did this happen? It’s a mystery to me. I didn’t know [his life] was going to end like this—he didn’t know it was going to end like this,” says Ota Omoruyi, a Skid Row resident from Nigeria. He’s known Africa for about six months, and calls him “Cameroon,” Africa’s home country. He wrote this nickname on a piece of cardboard that’s now the centerpiece of the memorial that stands where his friend once lived.