In recognition of International Migrants Day on December 18, 2012, the BLACK IMMIGRATION NETWORK, a national network of African American and black immigrant organizations announce its collaboration to uplift black voices in the immigrant rights debate. The network cites the need for an understanding of racial justice as a key principle for immigration reform and for the contemporary struggle for racial equity for all people of color. 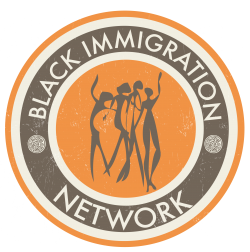 The BLACK IMMIGRATION NETWORK (BIN) was conceived through the efforts of Oakland-based organization Black Alliance for Just Immigration (BAJI), the Chicago-based Center for New Community’s Which Way Forward (WWF) Program, and American Friend Services Committee’s Third World Coalition (TWC) with particular help from their Northeast Regional offices. They began their efforts in 2009 and have now grown to involve over 20 organizations nationally and several hundred black participants in a variety of convenings and advocacy efforts over the years.

The observance of International Migrants Day is significant to the BLACK IMMIGRATION NETWORK’S analysis of how globalization has changed the political and economic landscape – in the United States of America and throughout the world. Various international policies, wars, corporate greed and environmental conditions ultimately displace millions of people and force them to migrate to other countries in order to survive.

The BLACK IMMIGRATION NETWORK recognizes that often times the same types of oppressive laws and culture that historically, and currently disenfranchises African American communities is gaining momentum and finding more fuel through its attack on immigrant communities in the United States. The coded language that is often hate-filled, coupled with anti-immigrant racial profiling laws, such as Alabama’s HB 56, and other practices encourages violence that threatens both African American communities and immigrants of color. Sadly these laws and practices do not comply with United Nations Human Rights Conventions such as those protecting the Rights of Migrants or the Convention to End all forms of Racial Discrimination.

In its quest for racial justice, BLACK IMMIGRATION NETWORK (BIN), has also observed that current immigration policies and practices discriminate based on race and class. This discriminatory practice adversely impact immigrants from Africa, the Caribbean and other Afro-Latinos in the Americas. To this end BIN promotes the leadership of black immigrant and African American leaders in the struggle for immigrant rights to ensure that as Comprehensive Immigration Reform is being debated – black concerns are not further marginalized.

Trina Jackson of Network for Immigrants and African Americans in Solidarity, based in Boston, MA explains, “Our challenge as a movement is to turn the common ancestry and the common struggles of African Americans and black immigrants into concerted advocacy and a common action agenda benefiting all of our communities.”

Some of the organizations represented in BIN’s membership include the Highlander Research and Education Center, Families for Freedom, Moving Forward Gulf Coast, Priority African Network, Coalition for Humane Immigrant Rights of Los Angeles, Florida Immigrant Coalition, Casa de Maryland, Center for New Community and Black Alliance for Just Immigration. Its leadership structure includes a national steering committee and a host of working groups, including a group specifically focused on Family Reunification Visas for Haitians and a working group focused on Education and Training.

You can learn more about the network by visiting: www.blackimmigration.net