The Black Immigration Network (BIN) is a national network of people and organizations serving black immigrant and African American communities who are focused on supporting fair and just immigration, as well as economic and social policies that benefit these communities and all communities of color in order to create a more just and equitable society.

We are a kinship of organizations and individuals connecting, training and building towards policy and cultural shifts for a racial justice and migrant rights agenda.

BIN is a Black-led network which:

The Black Immigration Network (BIN) works to promote just migration policies and practices grounded in racial and gender equity domestically and internationally, serves to strengthen the relationship and build solidarity between all people of African descent regardless of place of birth, and intentionally seeks to end the negative impact of economic globalization that is the root cause of global migration. 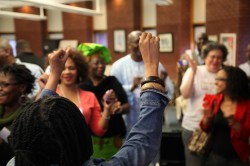 To this end, BIN engages in activities that provide opportunities to:

The mission of the Black Immigration Network (BIN) is to contribute to the social and economic well-being of U.S.-born Blacks and Black immigrants (immigrants throughout this document means immigrants and refugees) by organizing in these communities, developing the leadership of Black people, and advocating for policies that benefit Black communities.  BIN is a national network of organizations and individuals in the United States that works at the intersection of race, immigration and globalization. BIN also seeks to build alliances with other organizations and networks in immigrant communities and communities of color for mutual benefit.

Our shared African ancestry and similar experiences with racism and exploitation in the U.S. and globally gives us a common frame of reference for our struggles to achieve justice.  The diversity amongst Africans of the Diaspora can generate divisions when misconceptions and misunderstandings about one another and competition for education, employment and scarce resources prevails.  BIN is a vehicle for mutual education, appreciation and collaboration. Our network furnishes an important space for gathering the African Diaspora for joint strategizing, information sharing and work for the benefit of all of our communities.

We believe that the struggle for immigrant rights is one of the cutting edge issues in the fight for racial justice and democracy in the United States today.  Racism and economic globalization has created displacement and poverty in all of our communities and countries.  Black immigrants, other immigrants of color and people of color in general are being exploited and scapegoated for many of the economic problems the U.S. has experienced.  Increasingly, African Americans are being locked out of the formal economy and immigrants of color are being locked into an economic arrangement in which they are super-exploited as a way to undercut the wages, rights and working conditions of the U.S. workforce as a whole, creating greater profits for U.S. corporations.

We believe that bringing a range of groups and individuals together to address the issues of race, immigration, globalization and related issues can magnify the impact of all of our groups in changing immigration policy and promoting racial justice.  We also believe that BIN can be instrumental in bringing the issues, perspectives and leadership of various Black immigrant communities and African Americans born in the United States to the broader immigrant rights, racial justice and economic justice movements. BIN will help to build the capacity of its members to meet the global challenges that face all of us and to bring together a durable social movement that transcends the lines of race, gender, religion, sexual identity and nationality.