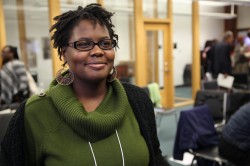 In honor and recognition of International Migrants Day, the Black Immigration Network (BIN) is highlighting a necessary and critical element in the national dialogue on immigration—racial equity. For much of the recent immigration dialogue, black immigrants have not been a part of that conversation in constructive and meaningful ways. A necessary factor of cohesion and mutual understanding is encompassing all elements and aspects of a debate. Coming out of the October Steering Committee retreat in Chicago, Illinois spurred an initiative to thrust foreword BIN’s mission, that will be the “judge and the jury” of the inclusiveness of the immigration conversation henceforward. These efforts will consist of supporting a policy framework on immigration, reducing and hopefully ending enforcement only approaches through the use of prosecutorial discretion, an enhanced concentration on Haitian Reunification Visas, and ensuring that a global context is included in any framing of the immigration conversation.

My colleagues on the Steering Committee and I view today and the next year as pivotal, as we guide the development of the policy plan and move forward with a revamped structured for the launch.  Key issue areas for BIN are the common struggle among African Americans and Black immigrant communities, and the inclusion of black immigrants in both policy and practice. The main issue areas support BIN’s goals of forming a migrant rights connection, our mission and values, an opportunity for advancing a racial justice agenda, and hopefully produce a cultural shift around racial justice.

In moving forward with building a movement on immigration, I echo the thoughts and sentiments of the previous post by my colleagues, “If the immigrant rights movement is to overcome its internal divisions and build lasting cross-racial and cross-community alliances that wield power, it must broaden its strategic outlook and willingly grapple with the tough and complicated problems.” To effectively address this concern, together we must hone in on the seeds that sprout global migration and work to bridge the multiple understandings of imposed and self identity; form and maintain alliances for the long-overhaul not only regarding immigration dialogues, but any trans-continental conversation; and lastly, just immigration reform must identify the impact on African Americans and formalize an economy that everyone can benefit from.

How will the launch affect migrants? One expected outcome is better clarity supported with action of who BIN is, our mission, and vision for migrants, which we believe will help drive and reform many national conversations concerning communities that affect us. BIN has already put forth its principles for comprehensive immigration reform. With engaged communications, education and training and fundraising working groups, BIN has a mass incarceration campaign embedded in critical research on reversing the historical trend of incarceration rates. Webinars and calls will kick off the New Year to train and mobilize member organizations, along with new efforts to reach both black immigrant and African American through shared media outlets and historical alliances. Today’s launch triggers a new threshold activates action and kinship to shine the migration movement.