The national government of the Dominican Republic is engaging in an ongoing campaign against Dominicans who appear to be of Haitian ancestry, as well as Haitian immigrants and their Dominican-born children. In 2013, the Dominican Constitutional Tribunal issued a ruling  retroactively removed citizenship from an estimated 250,000 people of Haitian descent, including those born in the Dominican Republic, rendering them stateless. This action denied  these Dominican citizens and residents the documentation required to exercise basic civil rights to:  travel, work, vote, gain access to public education , housing, and all measures synonymous with an existence with dignity. 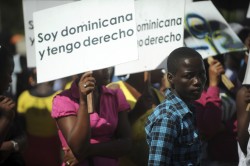 This is a continuation of ethnic violence rooted in deep tensions and historical conflict between the Dominican Republic and Haiti. The Dominican government’s policies have created a human rights crisis whereby thousands of people now live at risk and fearful of forced detention and expulsion. The nationality law is a racist policy, targeting Dominicans of Haitian descent and those who appear Haitian based on their physical features, namely dark skin. Rooted in the deep tensions and historical conflict between the Dominican Republic and Haiti, this current threat of expulsion is a continuation of ethnic violence. This violent and deplorable policy is based on anti-Black sentiment among some in Dominican society that seek to deny the mixed heritage of the Dominican Republic–the lasting scars of European colonial violence.The situation has bolstered a social and political climate putting Black people in harm’s way through xenophobic violence including public lynchings, raids and arson, which has and continues to drive people from their homes.  Since the deadline for “regularization” passed on June 17, over 30,000 people have fled to neighboring Haiti, in fear for their lives and uncertain of their status and ability to return to the Dominican Republic.

Dominican American and Haitian American communities in the U.S. have joined together in solidarity to bring national and international attention to the crisis in the Dominican Republic and call for action.  The Black Immigration Network calls on:

BIN is working with groups across the country to build a national campaign calling attention to this human rights crisis and demanding an end to the ethnic cleansing program in the Dominican Republic. The Rights for All in Dominican Republic Coalition is a broad coalition of organizations and individuals advocating around one simple idea: the most basic tenets of human rights and dignity should be extended to all people in the Dominican Republic regardless of race, class, or ethnicity.  The coalition  will engage in multiple strategies to put political and economic pressure on the Dominican government to reverse these dangerous and discriminatory policies.