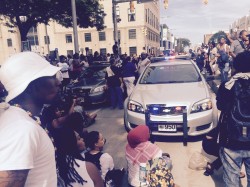 There is something different about the air we are breathing today. As much as we are expecting something there is also a sense that by our every action history is expecting us. The arc of history does not naturally bend in a particular direction so BAJI and the Black Immigration Network joined hundreds of activists and organizations in Cleveland for the Movement for Black Lives Convening (M4BL). We expected to get some answers, but we may have left with more interesting questions.

Many of you have heard about the confrontation with police officers at the end of the convening but our first confrontation with security forces came during a night out at a local Cleveland lounge. What appeared to be an especially powerful night out for Black activists turned Michael Jackson werewolves and afro-beat mavens was in reality laced with aggression as Black trans men and women were surveilled throughout the night as they used facilities many take for granted. In response marching orders came from the DJ booth but for many the story that a Black trans man was forcibly removed from a bathroom came by mouth to mouth under the din of music cutting across the dimly lit lounge. We changed rhythms from dance to protest and the music stopped.

Mark Winston-Griffith argued convincingly that, “Black Love Matters.” If this principle of Black love is as central to our new rhythm then we must come to terms with the modes of surveillance different Black bodies face. This can be frightening and it is fear that in part explains the erasure of Black people who have no hope of translation, citizenship, or basic empathy. But if we are honest we are all under surveillance because anxiety over Black movement as any immigrant will tell you is central to understanding policing, the American Dream, or anything for that matter. And for that matter we can take for granted that M4BL was under heavy surveillance.