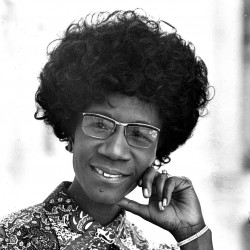 In January 1972 Shirley Chisholm became the first major-party black candidate to make a bid for the US Presidency. She was also the first black woman elected to Congress. The BBC UK Witness program interviewed Congressman Charles Rangel who worked with Shirley Chisholm. In taped interviews from the late Ms. Chisholm, she talks proudly of her Caribbean parents and spending her childhood in the British West Indies. Unbought and Unbossed, Shirley Chisholm is a celebrated pioneer for multiracial democracy, Womens Rights and  progressive politics.