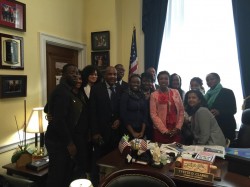 On October 21, the Rights 4 All in DR Campaign held an advocacy day on Capitol Hill, visiting congressional leaders to educate them on the crisis of statelessness facing Dominicans of Haitian descent. BAJI Policy Coordinator  Carl Lipscombe wrote about the importance of getting U.S. leaders taking action, “Unfortunately, the U.S. government has done little to support the thousands of Dominicans of Haitian descent, many who have relatives in the U.S. While several lawmakers have met with the Dominican government to no avail, the State department has yet to take an official stance against the deportations and a resolution denouncing the DR’s human rights abuses has yet to gain traction.

During our meetings with legislators we urged them to sign on to a joint letter to the State Department urging them to intervene, to reintroduce the resolution denouncing the unjust deportations in the DR, and to hold a congressional hearing on the matter.

We’re hopeful that Congress will take action –you can help by sending a letter to Congress urging them to respond to this urgent issue.