Among the many issues of contention in this year’s debate over Comprehensive Immigration Reform, particular focus has been paid to Diversity Visa.

Does Diversity Visa in fact meant to “diversify” racial populations by allocating more visas to Black and Brown people? What is the history of this policy and significance to Black populations in particular? In answering these questions, my goal is to not only to state facts and set the record straight but to raise a broader issue of the moral imperative race in the current immigration debate. 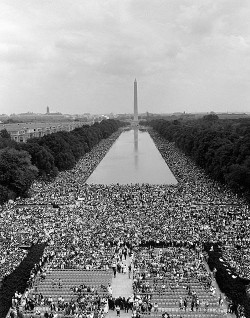 This is particularly significant this week as we focus on the 50th Anniversary of The March on Washington.  The national  immigration reform debate isn’t exactly gripping the attention of Black America and is unlikely to get more than mere mention by speakers this week.  It is however gaining considerable mention from some African-American institutions and leaders.  Unlike previous years, the Congressional Black Caucus and progressive national groups like the Black Immigration Network have taken the lead to speak out on immigration through race lens. For Black immigrants and African-Americans, the immigration issue is primarily seen in two relevant areas: 1. Issue of labor and jobs and 2. Shifting demographic trends in the racial makeup of this country.

It is on the latter that the case of Diversity Visa is often cited.  It is claimed that presence of Black populations (particularly from Africa) would not have been possible if not for Diversity Visas.  This argument is increasingly made as a push back to recent conservative’s proposals to do away with DV in order to allocate the entry privileges to “more deserving” professionals and highly skilled foreign workers.

Diversity Visa is a national immigration policy introduced in the mid-1990s with 55,000 visa allocations each year to people coming from countries of “low rates of immigration to the US”.   Of the tree categories through which foreigners gain entrance to the US on “immigrant visas” Diversity visa is one; the other two are employment and family sponsorship.

To most readers, the word “diversity” implies mixed populations of racial and ethnic origin.  Federal immigration policies however make absolutely no reference to race or ethnicity.  The word ‘diversity’ in DV is entirely in relation to “regions of the world” (not persons of an ethnic group) with a history of “low admission” to the US.   Visa allocations from countries therefore include Europe and Asia, Latin America and the Middle East, in addition to Africa.

The emphasis on DV as one of the most coveted avenues for entry of Black populations in the U.S. is factually wrong.  While it does provide an opportunity for a small group of Black immigrants (amongst European and Asian) to come to the US, the figures do not make it the single most deserving issue of protection on the debate over race and immigration.

The majority of Africans coming to the U.S. do so by far on visitor visas, followed by visas of family sponsorships, employment and students.

The 2012 visa allocation for Africa:

Moreover, residents of only five countries in sub Saharan Africa were recipients of the DV lottery in significant numbers that exceeded one thousand.

The growing influence of Black voices on the current immigration debate goes beyond advocacy for a single-issue of Diversity Visa.  It is one of the many issues on the table and it does not by any means define the broad spectrum of the call for “just immigration.”

Black solidarity in immigration policy debate is about racial justice. Groups like the Black Immigration Network approach this through layers of history and understanding of the Civil Rights Movement, the anti-apartheid movement and current critical issues economic and social justice. This broader framework is important to understanding what immigration debate brings to progressive African Americans and Black immigrants.

As we advocate for maintaining DV and fight for policy changes, let us be as militant and vocal about issues of family separation. Hundreds of families are separated each day, in lengthy detentions and without due process.  Let us raise issues of increasing criminalization of immigrants in much the same way Black communities are criminalized and racially profiled.  It is about building alliances between those who call for end of mass incarceration of largely Black people to the mass detention of largely Hispanic immigrants.

This anniversary of The March on Washington makes us mindful more than ever, of King’s message.  It was not only about integration and racial equality; it was about the true meaning of citizenship and full rights, it was about access to jobs, fair housing and employment.  Most of all, it was about recognizing the inter-sectionality of all these issues and the inalienable right and dignity of human beings, deserving universal rights regardless of color or creed or national origin.  That is at the heart of what the Civil Rights Movement was about.