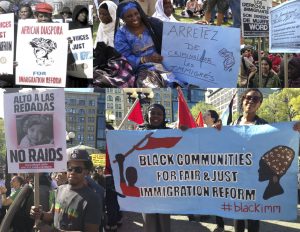 There are many proposed amendments to Senate’s Immigration Reform bill. Some are great changes and some are hate-filled. However, we and allied communities already know what we’d like to change in the bill. It’s simple and it’s outlined in our 10 Demands for Fair, Just and Inclusive Immigration Reform Letter to the Senate Judiciary Committee. On May 13th communities nationwide  are taking action by calling the senators who currently have the power to change immigration reform bill. You can help push them to change the bill by making 4 simple calls.  1) Call Both Senators From Your State   2) Call the Senate Judiciary Committee Chair (Majority Office) – Senator Leahy    3) Call the Chair of the Immigration Subcommittee (Majority Office) – Senator Schumer and let them know where you stand. Here’s a sample script for what you can say during that call:

“Hi, my name is      NAME      , from         CITY, STATE       .
May I please speak with the staff person who handles immigration issues?
I’m calling today because I want to let  SENATOR  (LAST NAME)    that I want them to advocate for fair, just and inclusive immigration reform. As a person who comes from an immigrant community/ cares about immigrants, we need you to ensure that new Senate Immigration Bill stops the criminalization of migrant communities, includes the Diversity Visa Program, Reinstates the Sibling Visa category and has stronger language to end Racial Profiling. I’m calling today not only for myself, but with my community’s support and because I’m in agreement with the 10 demands that the Black Immigration Network and other organizations articulated in their letter to the Senate Judiciary Committee. We need you to stand with us. Can I count on you to advocate for these concerns as the amendment process moves forward? Thank you.“

Thanks in advance for participating in the May 13th National Day of Demands in solidarity with communities from all backgrounds!