[Washington, DC – Friday, September 19, 2013] This week from September 18th through 21st the Congressional Black Caucus (CBC) is holding its 43rd Annual CBC Legislative conference. During this time the some members of the Black Immigration Network (BIN) will attend to share a progressive racial justice framework that uplifts immigrant rights, and demonstrates how African Americans and immigrants from Africa, the Caribbean and Latin America will be impacted by changing immigration legislation. The coalition of Black Immigrants and African Americans will be encouraging the CBC to continue to oppose the SAFE Act and other enforcement laden immigration bills, as enforcement usually means legitimizing racial profiling.

Earlier this summer the House proposed a new immigration-enforcement bill, HR 2278, the Strengthen and Fortify Enforcement Act, also erroneously known as the “SAFE Act”.  This bill was introduced by Representative Trey Gowdy (R-SC), Chairman of the Immigration and Border Security Subcommittee and subsequently passed out of this committee on June 18, 2013. The “SAFE Act” would allow for expansion of immigration enforcement mechanisms which would criminalize and make being an undocumented immigrant punishable by jail time, as well as permit local governments to create their own immigration enforcement laws. The “SAFE Act” also imposes unprecedented harsh and discriminatory penalties and restrictions for migration violation. 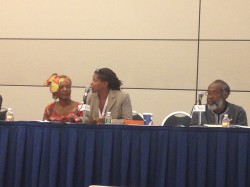 Francesca Menes, Policy and Advocacy Coordinator for Florida Immigrant Coalition and Black Immigration Network Steering Committee Member explains, “the United States has essentially been pursuing an enforcement-only approach for decades which has divided communities and proven to be extremely expensive and ineffective. This bill would also criminalize those who entered the country without authorization or overstayed their visa, including making a conviction for unlawful presence an “aggravated felony”; the SAFE Act would also cut funding for the implementation of the Deferred Action for Childhood Arrivals (DACA) program.”

Tia Oso, Arizona Organizer for the Black Alliance for Just Immigration shared, “The SAFE Act is basically the Arizonafication of the United States. It is the epitome of the attrition through enforcement strategy that is counter to what the our communities need.”

Abraham Paulos of Families for Freedom, “The ‘SAFE Act’ would do things such as expand the definition of “aggravated felony,” which in the immigration system means something different. The classification of “aggravated felony” includes misdemeanors and results in mandatory deportation and detention, and strips immigration judges of their ability to consider the circumstances of a person’s case. The House’s proposal also continues with ICE’s stance of undermining and eliminating due process by changing legal standards so that it will be far easier to deport people. With the ‘SAFE Act’, many new grounds of deportation would not even require a conviction.”

Since 1986, the federal government has spent over $187 billion on immigration enforcement, yet the undocumented population has tripled in size to nearly 12 million during this time. The House Judiciary’s endorsement of an outdated philosophy that foregrounds enforcement, detention, deportation and more penalties, and a more complicated, expensive, and decentralized immigration enforcement system is wrong and will only hurt vulnerable communities, and is counter to the creation of workable solutions for a system in dire need of repair.

Opal Tometi, the New York based Co-Director of Black Alliance for Just Immigration (BAJI) and National Coordinator of the Black Immigration Network (BIN) explains, “The so-called ‘SAFE Act’ is a misnomer and does not make any of our communities more safe. What the Black community actually needs is just and inclusive immigration policies. We need policies that’ll stop the deportation of beloved community members and allow for the reunification of families – instead of further disenfranchising low-income people by enabling racial profiling practices in law enforcement. These are the sorts of things that the Black Immigration Network demands for our communities.”

The Black Immigration Network (BIN) is a national network of people and organizations serving black immigrant and African American communities who are focused on supporting fair and just immigration, as well as economic and social policies that benefit these communities and all communities of color in order to create a more just and equitable society.