Approximately two weeks ago, an estimated 250,000 Dominicans of Haitian descent have been stripped of legal status due to a court decision that denationalizes generations of native and foreign-born Dominicans of Haitian ancestry. The ruling codified as Resolution 168/13 by the Dominican Republic’s Tribunal Constitution on September 23, 2013, retroactively removed the citizenship status of Dominicans of Haitian descent, rendering them stateless. This action denies these community members the required documentation to exercise basic civil rights such as: travel, work, voting, public education and housing. In essence, this ruling strips Dominicans of Haitian descent of their human rights and dignity, forcing them off their land, tearing families apart and violently deporting residents without a moment’s notice or due process. 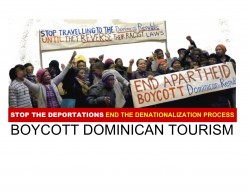 U.S.-based national formation the Black Immigration Network stands with the international community in condemning the Dominican Republic’s actions. The expulsion of Dominicans of Haitian Descent and Haitian migrants, regardless of immigration status, is unconscionable and wrong. The Black Immigration Network, a national organization of Black immigrants and African Americans, recognizes the racialized realities of the mass deportations and criminalization of black people as a human rights crisis. The policy is in violation of international human rights law, including the American Convention on Human Rights (ACHR). The practice of denationalization and deportation is a continuation of the legacy of anti-black racism in the Dominican Republic and must be stopped.

Resolution 168/13 has enshrined and bolstered a social and political climate that puts black people in the Dominican Republic in grave danger. Xenophobic violence including public lynchings of people presumed to be of Haitian ancestry. Raids and arson has plagued this nation for years and is currently on the rise. Already, over 30,000 people have fled to neighboring Haiti, in fear for their lives and uncertain of their status and ability to return to their homes in the Dominican Republic.

The Black Immigration Network (BIN) stands with people of conscience around the globe, international stakeholders, civil society and non-governmental organizations (NGOs) to demand the Dominican government immediately halt the removal of denationalized Dominicans and Haitian immigrants, and guarantee that individuals are not arbitrarily, unjustly, and permanently deprived of their civil and human rights.

BIN supports a boycott of all tourism to the Dominican Republic and urges the United States government to use this period to expand the U.S. Haitian Family Reunification Parole Program (HFRPP) in an effort to provide reprieve and justice for those adversely impacted by lagging immigration policies in the U.S. and in the Dominican Republic.

The Black Immigration Network calls for a Week of Action July 27- August 1, in partnership with grassroots activist and organizations to bring attention to this injustice and international solidarity to end this human rights crisis. All Black lives matter, beyond borders — the time is now for a global movement to stop anti-black racism in the Dominican Republic and promote national reconciliation.