On Sunday, April 22nd, 2012 the Black Immigration Network convened its 3rd National Conference. More than 100 people gathered at the Auburn Avenue Research Library in Atlanta, Georgia. The purpose of the convening was to ignite a conversation between the black immigrant community and the African-American community. We wanted to share stories, experiences, and learn from each other on how we move forward as a movement and as people of color in this country. 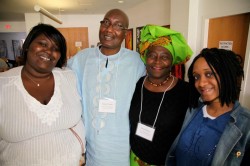 Participants came from all over the country and all over the world. We had very honest conversations around race, race relations, and its effects in the both immigrant community, the diaspora, and the African-American community. We shared migration stories and discussed the root causes of migration and stories from our native lands.

The primary goals of the conference were to:

The conference was a major success! As a network we were able to come out with some concrete next steps on how to move the network forward and how we can strengthen the overall immigrant rights and racial justice movement. We not only strengthen as a movement, but I feel as a people, we grew, bonded and strengthened our family.